Travel stories to inspire you

Cold wind kicks in our faces as we open the window of the carriage. Metres of snow are piled up on both sides of the excavated track and to me it’s a miracle that we can cross the border from Norway to Sweden in winter using this means of transport.

As the rattling train makes a turn, snow flakes hit our faces and we quickly close the window. From the moment we took off we’re standing besides it in the hall, as the magnificent view over the valleys demands full attention – the sort of which cannot be granted from your designated seat. We’ve made some amazing train journeys in our lives, but this one is jaw-droppingly spectacular. The journey takes us through snow-covered mountains, providing far-stretching views of valleys and lakes far below us, and the mountains opposite. Looking out the window on the other side of the train all we see is white: snowy fields as far as the eye can see. A bright sun in blue skies lights up deserted ski huts and a ski lift every then and now. We’re literally sliding through winter wonderland. We halt at a stop that looks as if it’s straight from a movie – there’s nothing here except for a wooden building. Two people get out carrying only a small backpack and their skis. For anyone who is into winter sports this must be heaven.

As we continue our way from the Norwegian town Narvik to Abisko in Sweden with the Arctic Circle Train, more tourists gather around us at the window, holding out their cameras in an attempt to capture the beauty of the landscape in a photograph. Only when locals point their annoyed faces our way as the constant opening and closing of the window has substantially lowered the temperature in our carriage, we take our seats for the last part of the ride.

The arrival in Abisko is an interesting one. When you start your internet search for Northern Lights in Sweden, the name of this town is likely to show up in your first hit. Home to the Abisko Sky Center, many tourists come here to try their luck at catching a glimpse of the Aurora Borealis. Finding accommodation only weeks in advance had not been easy and thus I had expected some vibrancy in this hamlet. But disembarking the train at Abisko Östra station all we hear is silence. There is no tourist shop nor a stand with flyers presenting to you the husky and snow scooter experiences on offer. This small town looks like it’s having a winter sleep under the snow-white blanket covering Abisko National Park.

And so we decide to take in the peace and quiet during a walk to lake Torneträsk, the 332 square kilometre big lake that buzzes with water activities in summer but is now covered in half a metre of ice.

We walk up the ice, lay down for the creation of a snow angel, and move snow to find the iced surface beneath the carpet. Continuing our walk, our eyes spot a peculiar object in the distance. An army green coloured caravan has been parked in the middle of the otherwise deserted lake.

Our curiosity is tickled. As we come closer, we notice a snow scooter is parked next to the cabin and the tires of the caravan have been replaced by the legs of a sled. Moving our eyes to the window we can see some movement behind the vintage lace curtains.

Walking around the caravan we see an ice drill laying on a wooden sled next to the caravan door. Excited but carefully we knock on the door – we wonder what kind of person we will find in this innovative yet retro holiday home. Our knock is replied to with a mumbled ‘come in’ and we open the door carefully. Although I’m not an expert, for me the man inside looks like a typical Scandinavian man. A calm face with clear blue eyes, a woolen sweater and short haircut. He holds his little dog in his arms. His face oozes calm, and although he’s extremely welcoming and gestures us to come in, he’s a man of few words. As I take in the small interior I see a gas heater, two small beds on opposite sides of the length of the caravan, and cans of beer underneath them. “I bought this caravan together with a friend. Sometimes we come here together, but today I’m alone. Sometimes he also comes here alone.”

As he tells us what he’s doing in the small caravan out here on the frozen lake, my eyes catch the hole in the floor of the caravan. “I come here for ice fishing. I can drill a hole through here.” He says while pointing at the ice under his caravan. There’s no hole there now though. Just a circle of ice that’s more translucent than the ice surrounding it. “Now I’m not fishing. I’m just here with my dog. It’s a new dog, just three months old.”

Although we mention the ice drill outside and ask him how long it takes to drill through the half meter of ice (about half a minute), he does not feel the urge to show us at all. This confirms my perspective on the caravan in the middle of the lake. It’s a true man cave. No rules, no one telling him what to do, just peace and calm and the only question to answer is ‘to ice fish, or not to ice fish?’ Just him and his dog and a couple of beers. And occasionally, when he does feel like conversing, his friend.

Stepping out of his caravan, another Abisko citizen passes by on a snow scooter. It’s the only sound we hear, while below the surface a 168 meter deep lake awaits its turn to showcase its calming sound of rippling water. As we walk back to the village of 80 citizens, I try to imagine what it’s like to live here – living in what I would consider to be isolation, and then still feeling the need to escape to your own caravan on the lake. The only need I’m sure I’ll feel in a couple of days is to take the train that runs twice a day and continue to another village for new adventure. Hopefully with the window open.

Say yes to winter wonderland yourself!

We visited Abisko on our way from Svolvær in Norway to Kiruna in Sweden. After taking a bus from Svolvær in the Lofoten Islands to Narvik on mainland, we boarded the train in Narvik with tickets we bought online through Scandinavian Rail.

Obviously, you can also do the trip the other way round, even starting already in Stockholm and covering the distance by night train.

For the bus part of the trip from the Lofoten Islands to Narvik, take a look at the website of 177 Nordland.

Highway 1 and beyond - Road trip on the USA west coast

Half of my heart is in Havana 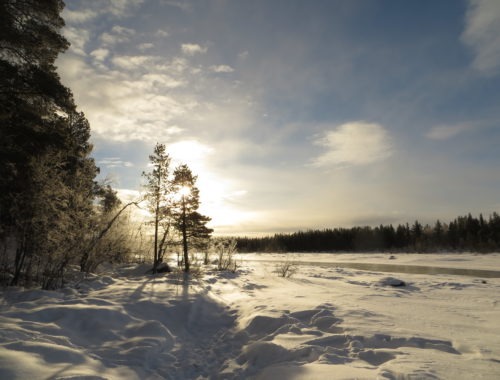 Morning glory in minus 14 degrees Celsius