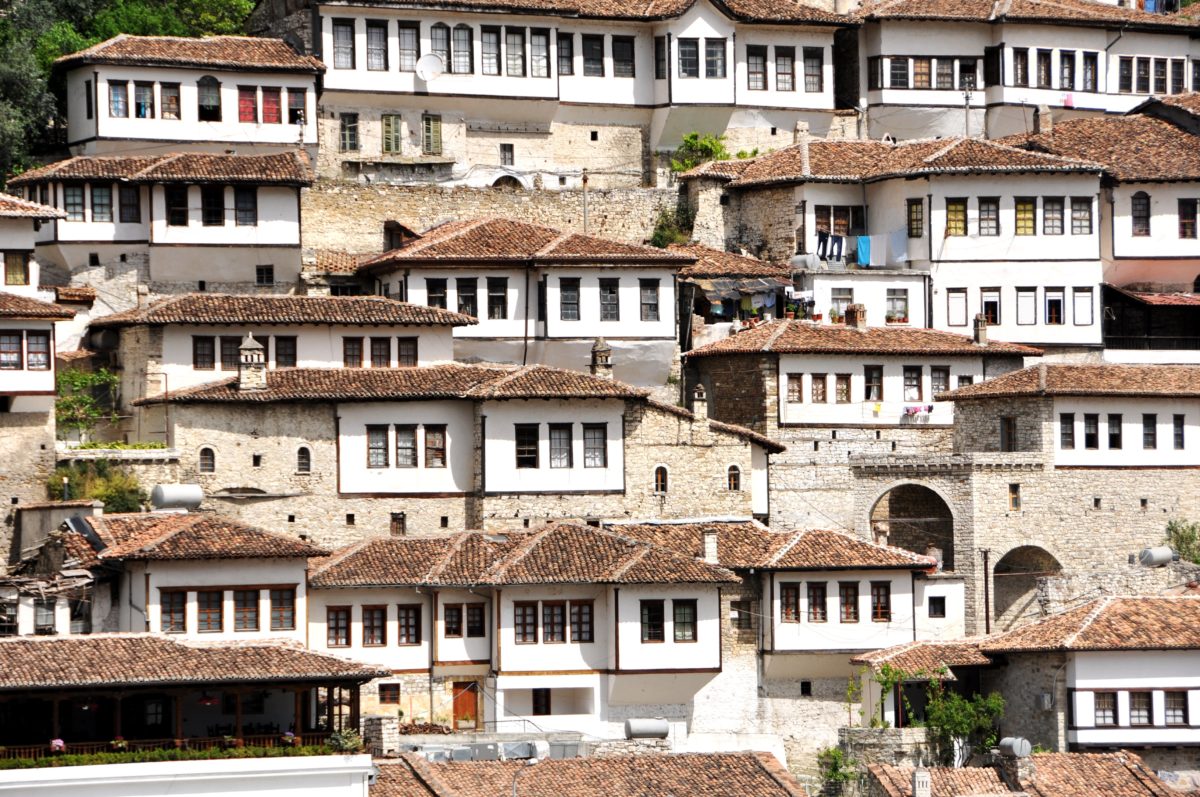 Eyes closed, hands gesturing with fierce Mediterranean intensity, Lorenc’ tenor sounded across the terraced garden. The big black ‘90s sound system blasted an Italian opera aria and my sister and I held our glasses of home made wine, watching Lorenc as he sang. On the hill behind us and across the river valley in front of us, the people of Berat had started closing the town’s thousand windows with wooden shutters, and the April evening started to grow chilly. The grapevines covering the terrace gently shivered in the twilight breeze.

We had just finished a simple plate of spaghetti, and Lorenc had asked us if we wanted to hear him sing opera. Opera was his absolute passion, and to him it seemed perfectly natural to share his interpretation of O Sole Mio with us. Despite the Italian flavours and sounds, the setting was unmistakably Albanian. Berat is called the ‘Town of a Thousand Windows’ because its two hillsides on both sides of the river are covered with white plastered town houses that feature countless windows looking out onto the valley, like the multifaceted eyes of an insect.

It was under the guard of those same windows that we had first met Lorenc earlier that day on a square near the river, when we had just returned from a late afternoon walk in the town’s surrounding hills. He had casually halted his bicycle alongside us to ask us where we were from, and where we were staying. “Why don’t you come over for dinner and wine tonight? I own a hostel up the hill, with a nice garden. I built a bar there. I can also sing opera for you.” Albania is – undeservedly – still a little-visited travel destination, and on this April evening outside the holiday season there were no guests occupying the two rooms in Lorenc’ hostel. There was nobody in his garden but us. Lorenc showed us photos of his wife and daughter, and shared his philosophies on life.

There were other chance encounters in Berat that introduced us to Albanian hospitality. While exploring the backstreets of the town, we ran into Anxhelo, who was also curious to learn where we were from. Anxhelo told us that he had spent some years working in the hospitality industry in Italy, and that he was now building his own hotel in Berat, together with his brothers. “I will show you my hotel,” he said proudly, “but first let me offer you coffee. You see, I know that many people think badly about us Albanians. I want to show you that we are good people.” Indeed, prior to our trip we received some surprised reactions when we told people we were going to travel around Albania. “Why would you go there?” people would ask. “Good luck not getting killed by the Albanian mafia!” another joked. Of course Albanians know that their country in reality defies its reputation and in their pride to show us their hospitality and warmth sometimes almost become defensive.

We sat down on a terrace with Anxhelo, who had called some of his friends to join us for a drink. We talked about the differences between our countries, as one usually does when meeting a stranger in a foreign land. He insisted that the bill was on him and walked us uphill to a newly erected structure on a corner overlooking this part of the old town. “I think that in the future, maybe more people will be coming to visit Albania. Look at how beautiful Berat is,” he said while looking out of a big hole that was to become a window in one of his hotel’s future guest rooms. He was right; Albania is undeniably beautiful and has full potential to become a popular holiday destination, as happened in Croatia over the past decades. Albania is rich in old historic towns, mountains, and its beautiful coastline near the town of Ksamil, which we visited some days later, can compete with some of the most gorgeous beaches in Europe.

Ksamil is a holiday town but when we visited before the start of the season, it was all but deserted. The family that we were renting a room from welcomed us as their first guests of the year. Finding out that they had two cats, we happily settled in and when Zenel, the son of the house, noticed our love for cats he whispered, “We have some kittens downstairs. Want to see them?” We followed him to the back of the house where he handed us two tiny kittens, their mother anxiously watching us from the garage doorway. “You can have them!” Zenel proclaimed happily after seeing us fall in love with the tiny beings. Albanians are happy to share anything with you to make you feel welcome, whether it is wine, coffee or just a bunch of adorable kittens.

Ksamil is a great place to linger for a day or two. The sea is clear and the sands are white, and nearby Butrint offers an exciting dive into ancient Green and Roman history. The remains of this city that was inhabited throughout the Greek and Roman ages and subsequently the Bulgarian, Byzantine, Venetian and Ottoman empires still display well preserved ruins of a cathedral, an amfitheatre, defense towers, and a baptistry. There is a bus that runs the 4.5 km stretch between Ksamil and the small peninsula on which Butrint is situated, but we decided to walk in order to take in the views on the bay and the fields clad with cypress trees, olive trees and herds of white goat. Midway, the Butrint-bound bus passed us and halted with screeching brakes after the bus driver had spotted us walking on the side of the road. “You want to go to Butrint? Please take this bus!” We politely declined, trying to explain that we’d rather walk. “But for you it’s free!” he yelled desperately, not understanding out determination to reach Butrint on foot. Albanians truly go out of their way to make you feel comfortable in their beautiful country.

Back in Ksamil we admired the enormous lemons that hung from the trees in the garden of our temporary home. Zenel spotted us and asked, “You want some?” Without waiting for our response, he immediately picked six lemons the size of a baby’s head and shoved them in our arms. When life gives you lemons, make lemonade, goes the popular proverb. When an Albanian gives you lemons, you just accept them gratefully and take them on the bus with you to your next destination, trying to think of useful things to do with the six huge lemons in your luggage.

In the quiet garden in Berat, we moved from talking about philosophy to practicalities and we advised Lorenc to create a visible sign providing directions to his hostel. The day before, when we arrived in Berat around noon on a bus from Albania’s capital city Tirana, we had struggled to find his hostel which was listed in our travel guide, but which appeared to be impossible to find in the town’s winding cobblestone alleys – especially while carrying heavy backpacks in the warm sunlight that held the promise of the sweltering summer to come. We had given up our search and took a room in a pretty hotel on the other side of the river. “You should put a sign out the front of the door so that people can easily see that this is a hostel.” “You are right, I should do that. What about my garden? In summer I see people passing by on the path behind my garden, and I have built my bar here but they do not know that they can come in for a drink. Do you think that other people want to visit my bar?” We agreed that it was a shame that his bar was largely unused, and guaranteed him that we were sure that other travelers would love to enjoy a cold drink in his garden when returning to town after a long walk. Lorenc disappeared inside his home and scurried back with a notebook and a pencil. He thought for a while, then started writing. “Welcome to all my friends. Come inside my garden for a drink. I make my own wine, you will enjoy it. I sing opera. Welcome.”

Create your own travel story!

Berat
Getting there – Buses to Berat depart at Tirana’s 21 December Square from early morning until mid-afternoon and take about 2.5 hours to get there.

Sleeping – While Berat is a small town, there are plenty of options for spending the night there. We slept in Hotel Belgrad Mangalem on the north side of the river, where we had an excellent stay. To visit Lorenc Guesthouse, can find it on the south side of the river at Stiliano Bandill, Lagja: Gorica entrance nr.18.

While it is possible to visit Berat on a day trip from Tirana, I recommend spending a night there because it is nice to experience the town in the evening and early morning without the day-tripping tourists. For most people, 2 days / 1 night is probably enough time to spend in Berat.

Ksamil/Butrint
Getting there – You can arrive in Ksamil by bus via Saranda from most major towns in Albania. Buses to Saranda leave Tirana throughout the mornings. From Saranda there are hourly buses to Ksamil.

Sleeping – There is plenty of accomodation in Ksamil as the town is a true beach holiday destination in summer. Outside the summer season you will find many hotels and restaurants closed. We stayed at Villa Caca which is a simple but friendly collection of apartments some 15-20 minutes walking from Ksamil’s most beautiful beach.

From Ksamil you can walk to Butrint in about an hour following the main road east out of town past olive groves. You can also catch a bus from Ksamil’s main road or directly from Saranda, passing through Ksamil. Some people combine a day trip visit from Saranda to Butrint with some hours at the beach in Ksamil.